We are happy to start, put miles on, refresh or help fix troubles your horse might have :-) we also do consignments you welcome pm me your needs and I will get back to you asap 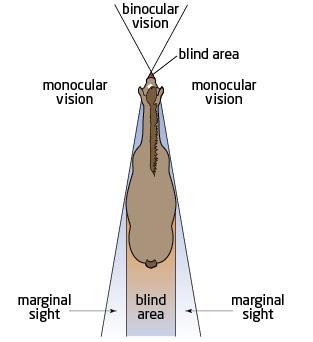 "- Horse can see almost 360 degrees around himself because his eyes are on the sides of his head. That's why he notices objects or movements behind him that you (with eyes on the front of your head) can't even see without turning around.
- There are two blind spots. A horse cannot see immediately in front of his nose (for about 3-4 feet.) and he also cannot see between his hips behind his rump for several feet. ( That is the reason that approaching a horse from directly behind his tail is dangerous. He does not see you coming. When you reach him, your touch or motion so unexpectedly close can trigger a seemingly unprovoked kick.)
- Horse sees most things with one eye--monocular vision
- Only about 65 degrees from center is highly focused and binocular.
- How to know whether he's looking with one eye or two? As he tries to focus with both eyes on something, he pricks both ears straight ahead.
- Horse has two ways to bring objects into focus--by using tiny muscles to change the shape of his eye's lens (which is the only way you can focus)--or by changing his head position to direct the image to a different part of his eye.
- Horse's extravagantly big eyeball (largest of any land mammal's) magnifies everything 50 % larger than we perceive it.
- Horse sees much better at night than you--even better than your cat!
- BUT horse sees some colors (yellow, green, blue; red is iffy)--but this color vision diminishes with decreasing light. That's why he may tend to bump into you, the gate, or his pasture mates if you're bringing in your horses around twilight: His color perception has dimmed, but his night vision hasn't quite kicked in yet."

An unexpected star from the Tokyo Olympics was our sport’s very own Suppenkasper (aka Mopsie), the reigning Adequan®/USDF Grand Prix Horse of the Year, who went viral online for his unique freestyle with Steffen Peters, complete with electronic dance music. Dubbed “The Rave Horse” online, clips of his freestyle have taken the world by storm, gaining millions of views on social media. Here are some fun facts about “The Rave Horse” ⤵️
https://yourdressage.org/2021/08/13/fun-facts-about-suppenkasper-the-rave-horse-who-went-viral-at-the-olympics/

One of my all time favorites and I will own one one day!! 😍🥰

See the magic of the Gypsy Vanner Horse Breed. Also known as the Irish Cobs, discover all about this magical horse breed from it's history, traits, and more

Three more happy clients sent home 😃 we have one stall coming open for a training horse...

Welcome to the Training family Tiffany Espitia!! Look forward to all the great training we will do together!

Today is a special day in #PaintHorse world! On this day in 1962 the very first #PaintHorse, Bandit's Pinto, was registered. What a day for celebration!🐴 #APHA #MarkedForGreatness #PaintHorse #History #PintosBandit

Domino had a great two weeks 😃

Thanks Horses Inside Out and Laura Bechtolsheimer Dressage for this video !

Been busy 😃 just sent home 2 of these three beauty’s. Have a stall open. For anyone who wants their horse started, miles on or bad habits fixed 😃

Do you wish that you could improve your skills as a horseback rider? 🐎

ANY ONE CAN RIDE
BROWNIE is here on consignment
13 year old trail/ ranch horse gelding grade 14.3hh
Good for his feet and loaded into my stock trailer great you can let him sit and pull him out with no issues.
Pm for price
If I needed another horse... 😃 lol this guys is wonderful and just the right type.

Yay! The best weather for riding is here!
We have a couple stalls open for your horse whether it just needs a tune up or started from scratch. We also help fix bad habits. Shoot me a message and I will be happy to give you the holiday pricing. We also do riding lessons and offer gift cards for that special horse person in your life 😃

Advances in equine health care have extended the potential lifespan of senior horses. What you should expect as yours grows older?

The blood vascular system of the hoof... I just can’t get over how intricate it is ♥️

River: in for 30 days and doing good

Speccas is so smart this is her third ride.. and already started neck reigning and great stops!! 🙂 she so good!

For consideration I have three very nice geldings all different different levels of riders. Pm for info.

We also have a couple stalls open for training.. pm me your horses information (ex: what his/her past experience is, bad habits, what you would like him/her to do and your experience) for pricing and details.

We have this wonderful 7 year old up for consideration pm if interested 30+ days of riding..

Do fish help keep horse water tanks clean? Maybe not, our nutritionist says, but they might have other benefits. Here's why.

We have a couple stalls open and in the honor of Father’s Day we are offering a discount on our 30 rides full care price 🙂 for the month of June.

We have two stalls open for training, we work with horses with discipline issues, need someone to put time in the saddle or just handled on the ground and prepared to be riden.. if it sounds like you might need our expertise please pm me with details about your horse and what you are expecting us to accomplish :-) thank you have a wonderful day.

We have some training horses that have come through... they are all coming along nicely... a couple have gone home, happy. :-)

This is Glory she is in for consignment... very caddy and quick, eager to please. Can be intimidating so I recommend an intermediate rider.. we are keeping her legged up till sold.

There’s so much to catch up on! 😀 we have several new horses in for training and two in on consignment for sale... sorry in advance for all the posts.

The importance of radiography!!! A client who just took ownership of this horse wanted us to take radiographs to assess why his hoof was malformed. He had some abscesses that had popped out at the coronet band. The radiographs took us all by surprise!! Nobody knows how long this guy had a nail in that foot. Plus he was barely lame!!! 😯😯

After a nerve block was performed, the nail was removed. We soaked his foot with betadine and water to help clean out the bacteria. He now has some antibiotic paste in the nail hole and his foot is wrapped. He also got a tetanus booster and started on systemic antibiotics.

This is one lucky horse! This could have turned out much worse for him. We are definitely not out of the woods yet, but it looks like he should make a full recovery.

Horse and Hound always has a mobile radiograph unit on the truck! We are always ready and excited to take some pictures to better diagnose issues with your horse. Or dog. Or cat. Or goat. Whatever you have, we can take it! 📸📸🐎🐕🐈🦄🦓🐖🐄🐐🐫🦆📸📸

We have a couple good girls for sale on consignment 😁

Be the first to know and let us send you an email when Badger Creek Outfitters: horse training posts news and promotions. Your email address will not be used for any other purpose, and you can unsubscribe at any time.

Other Pet Services in Marana

Hopefully the family is doing well