JJ Stables, LLC is a family-owned stable located in the Catoctin Mountains just off Route 15 near the town of Lovettsville, VA. JJ Stables is a family owned horse boarding stable north of Leesburg, VA. 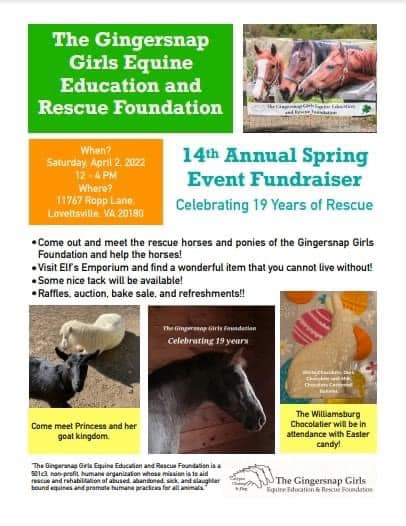 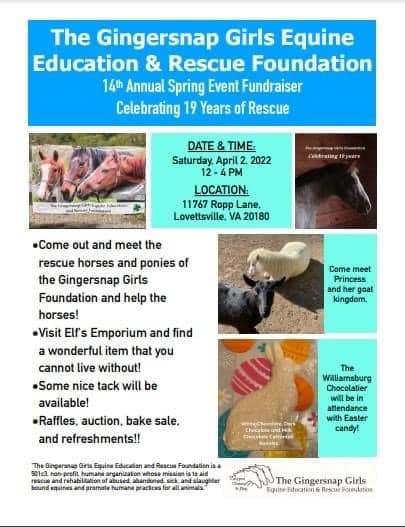 Little Miss Lily is having a major laminitis flare. She has on her fancy new boots with special orthotics. Praying that she gets through this soon. We love our sweet girl!

One of the (only) things that I enjoy about the snow is getting to see all the tracks left by the visiting creatures during the night. Here are a few: our neighbor’s five-toed cat, a mouse and a small bird.

Fall on the farm…

Mornings here are so peaceful.

Tomorrow is the day!!!

Solution: Go Hunting, tally ho and make sure breakfast is ready when we get back. Your horse will go without you.

Solution: Go Hunting. He will get left behind and will be so focused on keeping up, he will forget to buck.

Problem: My horse is spooky.

Solution: Go Hunting. He will be so focused on navigating the in-your-face obstacles, he won’t have time for drama.

Problem: I have trouble seeing distances.

Solution: Go Hunting. Every distance is pretty much a hail Mary whether its correct or not.

Problem: I need to get my confidence back.

Solution: Go Hunting, we will give you alcohol if needed.

Problem: My horse is green.

Problem: My horse is afraid of dogs.

Solution: Go Hunting. You will surprise yourself when in fear of your life.

Problem: My horse won’t load on the trailer.

Solution: It will only happen the first time. Once he knows how much fun he’ll have he will run on. Kind of like s*x. Only better.

In short: Go Hunting and you and your horse will be happy.

Only one week away!!!

I believe we have new best friends here…❤️

This sweet puppy arrived yesterday! We are working diligently to get him up to speed so he can help El with keeping the farm safe. Welcome Basil! 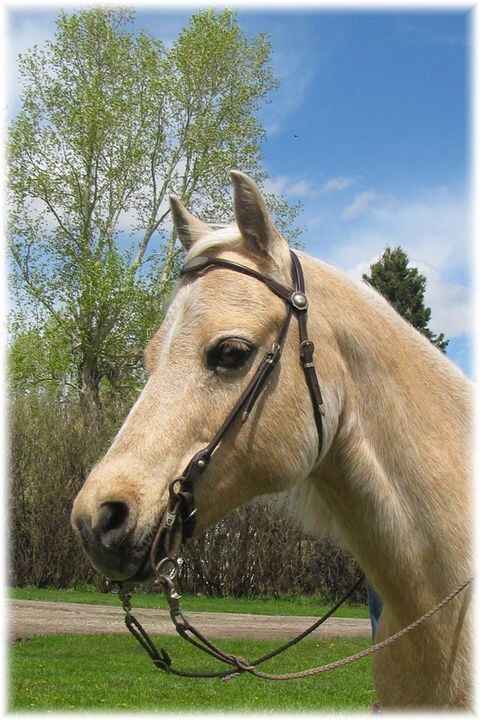 Got a minute? Pour yourself another coffee and come sit. Something's bothering me and I need to get it off my chest.

Once again, I've been sent a message by a delightful young mother who has bought a 'broke pony' for her kids. Problem is, despite paying a hefty price tag, it's not working out. The seller, quite a well-known person in her area, has refused to take the pony back, despite promising that it was safe enough for her four children and charging thousands for it. Unbelievably, the pony was only two years old.

I keep talking to parents who find themselves in this situation, over and over again. These are intelligent people who truly want what's best for their children. So, what's going wrong?

First, don't automatically believe what any seller is saying about their kids' horse or pony. Bottom line, you've got to see it, to believe it!

If the seller claims that kids can lope to the creek ba****ck, then you need to see that being done. If they say it was Champion ridden pony at Such 'n' Such Show, then you need to see the video to prove it. Before you buy, Google any winning performance claims. What this will tell you is that if the seller will lie about something won, he or she will lie about something else.

Next, we all know the individual animals that were saints at age two and where everyone grew up together, to live happily ever after. Do yourself a favour and forget about them. There is no way that a two-year-old pony has—or should ever have—enough time and mileage on it to be called a kid’s horse.

Instead, know that your new pony's and your child's ages should add up to around twenty, just to be on the safe side. This, because somebody has to have the brains in the outfit and two babies aren't generally going to be able to make good decisions together.

When you go shopping, the following should be standard equipment, not random options on a wish list:.

Ease of catching, tying, loading and unloading; walking, jogging, loping (preferably in a bit and not a halter, because wearing a bit well just helps prove that some time has been spent educating the animal); circling, riding in straight lines, going happily away from home, alone and in a group; neck reining, if the animal is to be ridden by a Western family; respectful ground manners and handling of feet; allowing jackets to be put on and taken off while mounted; safe riding around dogs, machinery and highway traffic; standing still for mounting and a healthy respect for the word whoa.

I am also of the unpopular opinion that small ponies working ONLY on leadlines, being led around with children on board, may be quiet but they aren't actually broke, or trained. There's a big difference.

Any hint of balkiness, herdboundness, crow-hopping, spookiness, rearing, nipping, halter-pulling while tied, or A LACK OF WILLINGNESS ON THE PART OF THE SELLER TO SHOW THE HORSE OR PONY GOING UNDER SADDLE are deal-breakers.

You don't have to be belligerent with sellers. There are good and trustworthy people out there... but it IS your job to find them. Remember, seeing is believing. If, for any reason, you cannot watch this stuff happening, please go home with an empty trailer. The safety of your kids demands it.

Shown here, the beautiful and famous Arthur, mentor to so many children who have gone on to become serious and aspiring horse(wo)men. Kids' horses come in all shapes and sizes... and Arthur, among the smallest of them, has perhaps the biggest heart.

X-rays showed that I’m healing well and my doctor cleared me for walking on my cast/boot! I’ve never been so happy to be back out taking care of everyone! 🎉 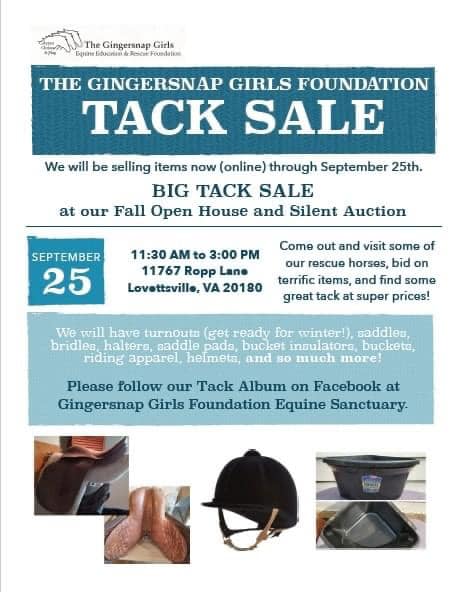 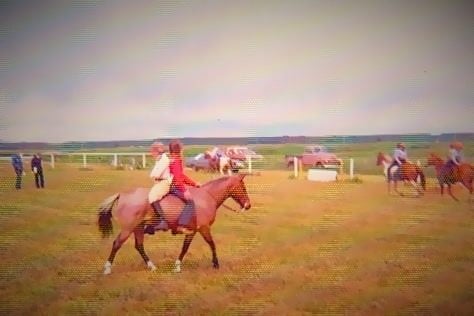 This is what I loved the most about growing up riding horses!

Once upon a time, way back before we were scared of liability…

Ba****ck Tandem was all the rage at open shows and gymkhanas, where we rode, without saddles or helmets, double and yes, backwards. We walked, trotted and cantered, switching places, singing aloud, somehow pulling off whatever the judges called for. Whether it was through sheer good luck or good horsemanship, we survived.

Most show schedules made room for these fun classes, once the regular ones were out of the way.

Here, my best friend Andrea and I are shown piloting my Welsh pony, Peter, to a win in a class of older teens. Sweet victory! Forty-five years later, the memory of this moment still makes me smile.

By the time my equipment was ready and waiting to load for the average show: stock saddle, Hermes close contact, sidesaddle, pony harness, cart, feed, buckets and all my clothing and bridles, it looked as though we were hosting a large garage sale. I’m sure most of you will remember other specialty classes that I’ve forgotten.

Some may well laugh, with the higher horsemanship and safety standards that are guiding us now. But this era was the one of my childhood. The last to grow up without technology and left largely to our own devices, what we could imagine was what we aimed for. Were we a bit rough around the edges? Perhaps. We were all-around horsemen, if masters of none.

We grew up, mentored by those who once horse farmed or rode their ponies to one-room schools. I'm glad I was there to hear their stories and to ride among them.

What are your memories of riding as kids? Were you able to grow up as I did, your jeans sticky with ba****ck horse sweat? Or, did you pedal your bicycle, dreaming of one day riding your black stallion to race the wind?

This big puppy will be coming home with us this weekend!

Come out and meet the horses!

This guy has been working on fly control in the feed room for about a week now. He uses the cat door, is friends with the resident cats and chickens, and swims in the “pool.” 🐸

I sure wish these two were going back to Upperville this year! ❤️

We have spectacular morning views!

The Business of Boarding

Great article! It sticks to the basics of daily care, but doesn’t even mention vet and farrier cost. This is just the starting point for the cost of horse keeping.

We hear it all of the time: “I don’t make any money off of boarding, its a business of love.” And we as the boarders shake our heads in frustration, wondering how our hard earned …

These two LOVE the snow!

It’s pretty, but we are ready for spring.

Do you have chickens in your barn? Some fun facts for you all on this foggy Wednesday!

If his family financial circumstances had been different, Robert “Rob” Lawrence Jacobs might be jumping Grand Prix every weekend. Admittedly, there are some moments he wishes that would have happened. But when it comes down to it, Rob is actually happy that it didn’t.

With unlimited financial backing, Rob’s innate talent with horses likely would have made him a competitive rider. He might have gone to equitation finals and done junior jumpers, rather than only scraping together enough to go to two “A” shows by the time he went to college.

Instead, he’s spent his life coaching and teaching riders in North Carolina — including hundreds who would not have been able to afford such an opportunity.

Read about Rob and his inspiring generosity as he makes opportunities available to riders from all backgrounds at the link below:

Oreo is showing off her perfect teeth, but I believe her goatee is most impressive! 😜

Be the first to know and let us send you an email when JJ Stables, LLC posts news and promotions. Your email address will not be used for any other purpose, and you can unsubscribe at any time. 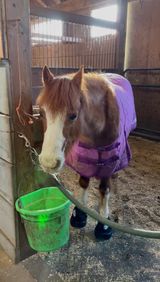 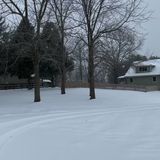 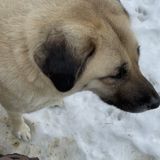 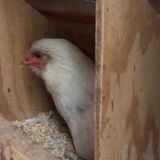 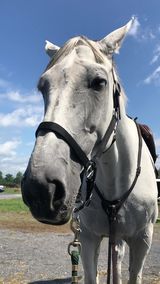 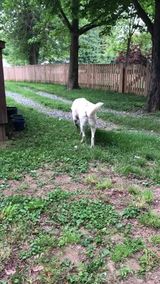 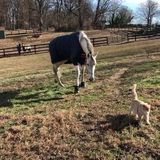 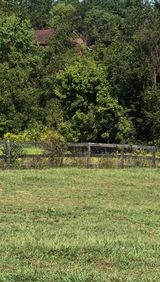 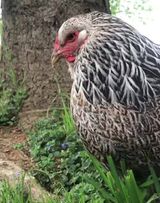 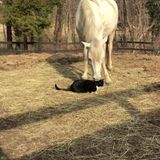 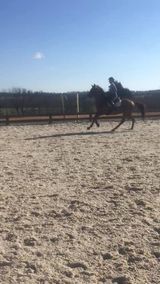 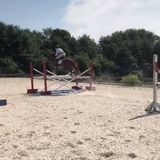 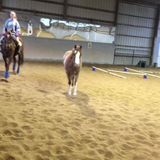 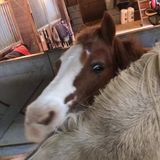 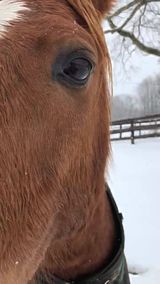 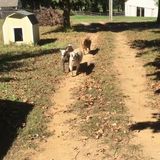 Other Pet Services in Lovettsville