Bayou creations by a Louisiana-based alligator artisan. All of our alligator products come from gators that were harvested during regulated hunts or licensed farms.

We maintain, through the Department of Wildlife and Fisheries, licenses for conducting business as an alligator parts retailer/dealer. Sorry, due to strict export regulations we do not offer international shipping at this time. We’ve got a beautiful wide mouth head from a 12’ gator in our Etsy shop!

This is a genuine wild-caught American Alligator (Alligator Mississippiensis) head that has gone through the taxidermy process and is ready for display. The photo is of the alligator head you receive. It is from a 12 and a half foot Louisiana gator and is nearly 20” from snout to back and about 12...

#DidYouKnow American alligators appeared about 84 million years ago have gone through little evolutionary change since the time of dinosaurs??

Their ancestors evolved 200+ million years ago. The only older reptiles are turtles and tortoises!

Alligators are amazing! We're celebrating the wave of gator-itis that's sweeping the nation -- that's obsession with all things gator!

Our friend Double Barrel Bambie has been using our gator heads to make some cool creations! Check out her Etsy shop: https://www.etsy.com/shop/DollargatorGirl

Recycling some chicken leftovers today! They’ll be outta the dryer in a couple weeks and in our shop as backscratchers and whatnot.

Ronnie Adams from Swamp People stopped by for a visit today. Left to right: Junebug, Ronnie and David.

This big boy is looking for a new home.

This is a genuine wild caught American Alligator (Alligator Mississippiensis) head that has gone through the taxidermy process and is ready for display. The photo is of alligator head you receive. It is from a 12 and a half foot Louisiana gator and is nearly 20” from snout to back and about 12” ...

We’ve got some DIY alligator skulls up on the GATORS GALOHR Etsy and eBay shops. Pick one up before they’re gone!

One of our customers found a great way to incorporate one of our heads into their Mardi Gras decor! Be sure to check us out on eBay or Etsy to get your own gator head!

One of our customers loves this new addition to their snake tank! ❤️🐊

Watch it now and discover more trending videos on TikTok!

Gator heads make great Christmas presents! Check us out on eBay or Etsy for some unbeatable deals!

Sorry for the lack of updates lately. We took a bit of a hit from Hurricane Ida. We had no power for a bit and had to get a tree removed from our roof but we’re getting back into the swing of things! ❤️ 🐊

Our new friends over at Tucker's Seasoning are making great use of the heads we sent them. Have a look and be sure to check out their website: https://tuckersseasoning.com

“It shakes me! It quakes me! It makes me feel goose-pimply all over!”

He loves his gator!

We’ve got new items at our stand at the Flea Market & RV Park at Menge, including several of these cool key racks we just finished!

We’re up by Gulfport again today at the Flea Market & RV Park at Menge. 🐊❤️🐊

Elvis stopped by the booth again! 🎶

The photo is a generic photo of one of our gator heads. The head you receive will be roughly 5 to 7” from snout to back. These are real alligator heads.

Sold him a gator head and he said, “Thank you, thank you very much.”

We’re up by Gulfport again today at the Flea Market & RV Park at Menge. If you’re in the area stop by and check out this big boy! 🐊❤️🐊

We’re up by Gulfport today at the Market at Menge. If you’re in the area stop by and let us take a bite outta your wallet! 😎🐊❤️🐊

Be the first to know and let us send you an email when Gators GaLohr posts news and promotions. Your email address will not be used for any other purpose, and you can unsubscribe at any time.

Send a message to Gators GaLohr: 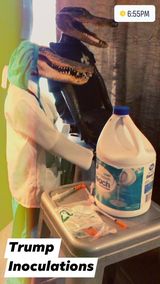 Hidden away from humanity, deep within southern Louisiana's Honey Island Swamp, lives a community of creatures described as half-alligator, half-human. They live lives very similar to our own, with the exception that they avoid all contact with the outside world.

Those are the fantastic claims of former journalist David Lohr, who says he encountered the creatures three years ago when his boat sank near the Pearl River.

Lohr alleges he was knocked unconscious when his vessel capsized and later awoke to find himself surrounded by the crocodilian-esque species. Lohr claims the creatures nursed him back to heath, during which time he came to learn about their lives and their culture. Once back on his feet, Lohr says he was taken to the outer boundaries of the swamp and left to find his way back to civilization.

While it's known Lohr was on a boat that sunk on the river in 2017, and he was reported missing several weeks before being found wandering the swamp, his claims have been ignored by the scientific community. The consensus among them being Lohr's encounter with the creatures was a hallucination induced by injuries sustained when his vessel capsized.

Lohr readily acknowledges his story has all the elements of hackneyed fiction but maintains it's true. To that end, he hung up his reporter hat and became a creative artist in New Orleans. His work, of course, centers around lifting the veil on the gator people by recreating faithful likenesses of those he claims he encountered in the swamp.

In the immortal words of Robert Ripley, "Believe it or not!"

**No gators were harvested for any of the artwork on this page. These heads are discarded by farms and taxidermied by our good friend June Bug, who owns and operates June Bugs Cajun Gifts. Recycling the heads in this manner pays tribute to these majestic creatures and shows there is much more to them than a set of ferocious teeth. We would also like to thank our good friend John Preble, the owner and operator of the Abita Mystery House. His artwork has been a source of magic and inspiration.

My stepson is obsessed with swamp people so he got a early birthday present. He will not put it down. Keeps asking who shot it LOL Thank you!
thank you so much just got mine for a birthday present and love it. but what do the markings mean on it so i can write it down. it has LDWF 21-192301
Hey, David! Is this one of yours??
Would love to get a shirt with your logo...?